The above place is nearly 11 thousand feet above the sea level and the journey over and through one part of the Rocky mountains since leaving Denver this morning has certainly been the most magniﬁcent spectacle my eyes have ever beheld. We could see the range of mountains from Denver and as we sped our way along in the little narrow gauge cars it seemed as though we were not more than 5 or 10 miles from them. We came at length to a little homestead called Canyon City and on leaving this we soon entered the ﬁrst of three canyons - "the Royal" which is simply a narrow gorge between two high mountains with a tiny looking ledge cut and formed in the rock for our train to whirl around and ascend - every turn opening up new views which for majestic grandeur are said to be unequalled in the world. No words could ever describe it and the man would be a fool who would attempt to do it. It seems to me to be a regular Atlantic ocean of mountains, most of which are covered with snow. Thousands of little wooden huts are scattered over them and here and there a little table land and some cattle are found. The grandest of the scenery I shall pass on my way to Salt Lake - "Marshall Pass" being the crowning bit I hear. This is a great mining centre and a gentleman at Denver urged my visiting it for the business and shall see what it is like tomorrow. There are a good many Cornish miners in this country I am told but have not yet met with any. 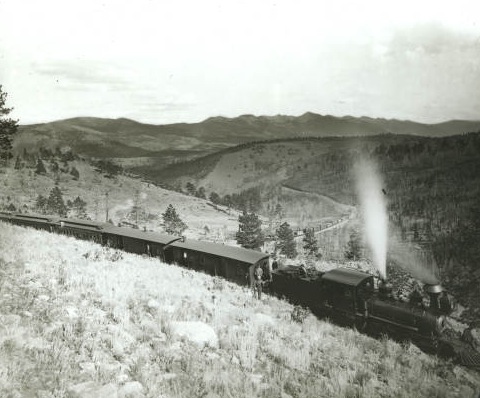 Have had to keep indoors today, having had an experience since writing you last night altogether new. On going to bed last night I felt great difficulty in breathing and the heart was trembling a good deal - I concluded I had taken severe cold and yet the usual symptoms were lacking - had no sleep through the night and a bad headache so did not venture out of doors this morning nor through the day. In conversation with a gentleman at the ofﬁce I ﬁnd it is occasioned by the great altitude and the sudden transition into it, so that I can quite understand it now and propose moving off in the morning for Salt Lake which is many thousands of feet lower - I hear that 90 out of every 100 who come are affected in the same way. We are on the top of a mountain and yet surrounded by others on every side, some of the peaks of which are in the heavens.

We have had a lot of snow too since my arrival last night and I am wishing to get out of these mountain regions into an atmosphere not quite so rareﬁed and possessing a little more moisture.

D.V shall hope to reach the Mormon city on Xmas day about tea time and all being well expect to see San Francisco about next Wednesday. What thousands of miles I have travelled since Sep. last - these 5, 6 and 700 mile states across this continent are very wearying - shall be glad to get a week's rest I assure you - it seems a little strange to be selling biscuits up to within a day or so of Xmas day and the following day for I hope to get hold of some trade at Salt Lake.

Again I must conclude with much love to you all and many kisses for all the dear children believe me my dearly beloved wife.