I received two week's mail from Shanghai yesterday Lord's day morning and soon picked out the home letters and was once more through the tender mercy of God comforted and especially so to find that you had recovered from your cold and had lost your cough. I do trust you will be preserved from renewing it again. Am glad Eunice has seen Sir A. Clark and have no doubt she will soon feel the benefit of his wise treatment. Two letters from Harry – what do you think of that and two from Arundel with a nice one enclosed from Willie Hardie – do you envy me in having so many loving correspondents – well if they only knew how I valued their epistles and what a solace it is when you are twelve thousand miles away from home they would write closely and not mind a few sheets of paper.

The Lord's kindness has abounded toward me again during the past week and I have had much fellowship with many of the dear missionaries here – they say I am one too as much as they are. Yesterday morning the door was opened for the gospel in a good large building and many of the European residents were present and missionaries who congregate at this place on their way into the interior and in coming down from other Northern parts some for rest and some to change their stations. Two gentlemen resident here have shewn much kindess one a Mr Cozens the manager of Jardine Matheson's house at this port (they are the largest and most influential house in China) who is a bright Christian and seems to have been much refreshed in his soul and a Mr Collins another large merchant here, also a believer. The Lord spoke to his heart yesterday morning and he was much broken. In the evening I returned with him and Mrs C and supped with them, Mr Cozens was also with us, and the latter gentleman kindly invited me to come and stay at his house altogether. The business too has been prospered beyond all expectation indeed I have done business with all the leading houses both European and Chinese and all seem like old friends although I have not yet been in the place a week.

P.F. had given me the name of a Captain Watts living at Taku the mouth of the river who keeps an hotel there and a store in connection with it – also works a tug steamer up and down the river. I had written a letter to him and was just taking it out to post when I heard that he was outside our hotel door in his tug, so I went to see him and he came in and saw all my samples. He seemed a nice fellow and I asked him if he knew anything of the West of England and soon found he was a South Devon man, or had lived there in his early days but was really a Cornish man from Boscastle and knew my old friend Mr Jabez Brown there and Watts had a very grateful remembrance of him as the superintendent of the Wesleyan Sunday School where as a lad he used to go. Watts' father was a kind of right hand man of T.R. Avery's he has been in China for 27 years and says I am the first person he has met [in] all that time who knew anything about Cornwall. He is a smart intelligent man and holds a good position here and seems to be much respected and was very glad to see me. He lost his wife about 12 months ago which he seemed to feel very much, two of his boys are at school in Chefoo and I have promised to see them if possible when I return there. Tomorrow God willing I start for Pekin – the landlord has engaged a house boat for me and a servant who speaks a little pigeon English – he had also packed me up a basket of chow chow for 3 or 4 days and lent me a frying pan, kettle, saucepan &c &c and a mattress for a bed. There are four men in the boat who take their turn in "uloing" (sculling) all the way up the river for about 80 miles where I change into a bullock cart and have about 14 miles over a rough road to the capital – the sand storms are the most unpleasant things we have to encounter and the few days of my stay here has given a little experience of this. The weather is very peculiar at times – one day last week it was intensely hot indeed the wind was as if it were coming from a furnace – I never had such a singular experience before – the glass rose to 92 in the shade and the sky was like lead and very heavy. The people were all expecting an earthquake, this peculiar weather being generally the indications of such but none came and it passed away with a storm of wind. The glass fell 20 degrees by the following day which was a great relief. The river was so narrow I am told and the banks lined with mud huts occupied by natives nearly all the way up and it is very easy to land now and then for a walk along the path. The boat continues its slow progress night and day and should we arrive at the boat's terminus in the evening a gentleman here has given me an introduction to a missionary there who will give me shelter for the night, as I should not care to travel in the bullock cart after sun down.

From all I can learn of my boat it is not unlike my Lorna Dune experience and will be quite a contrast to the saloon of a P & O. I expect it will be in vain to look for a bath room. However 'tis good to be in our gracious Father's hands – he has and does continue to sustain my joy and confidence in Himself in a wondrous way and I rely upon His goodness in all my travels who has said I will never leave thee nor forsake thee so that we may boldly say the Lord is my helper.

I was glad to hear you had been able to get to a meeting and can quite imagine what a comfort it was to your heart. How little the thought is in the minds of many of the saints even where they are bright that it is our privilege to give Him something even the worship and adoration of our hearts who so loved us and has He not a claim upon us for this who once said a worshipper "where are the nine?".

Shall not have time to write Arundel and Harry this week so they must wait for the next mail – much love to them each and their dear wives and little ones  and with a double portion for yourself believe me my dearly beloved Angee.


Kind love to Eunice and all our dear friends at Ifracombe and Barnstaple – the collars have not yet arrived. 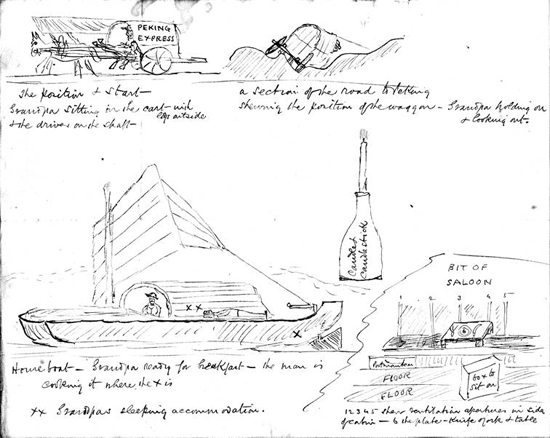