You will have received the short notes I sent from off Gravesend and the Isle of Wight. Just as we made the lights of the latter place our ship was suddenly mantled by a thick fog necessitating dropping of the anchor and we remained there for the night with the bell ringing out at short intervals so that sleep for many was out of the question. Soon after daybreak however the fog lifted our Channel pilot was dropped and our ship headed for Ushanti[?] and this far through mercy we have been favoured with very fine weather or I should say smooth, but it has been dull without a cheering ray of the sun until this morning when it rose upon us in Eastern fashion so that we could all do with a little less clothing. My cabin companions are two officers – a Col. and a Captain both bound for Gibraltar – I was made to feel the reality of taking up my cross in bowing the knee before them on turning to rest and rising mornings – strange indeed that we should ever feel ashamed to confess that Saviour Whose love we have known and enjoyed and before whom in that glory which He has now entered our deepest joy will be to fall down at His blessed feet owning His worthiness. But now we are in a world that has and does reject Him – hence the cross – to escape it or to seek to do so is a practical denial of Him and this the flesh that is in us is ever ready and clever in doing but greater is He that is in us than he that is the world or our own hearts either, so that we are made overcomers. The Captain of the ship gave me permission to preach the gospel in the second saloon last night and it appears the clergyman who conducted the service in the morning announced an "informal service" in the second saloon in the evening and afterward asked the Captain's permission. The Captain then came to me about it and I at once withdrew and left the Clergyman free – subsequently the Captain came again saying that the Reverend would not take it and would much prefer that I should, so I accepted it remembering that word – "Behold I have set before you an open door and no man can shut it". In the afternoon I found there were a company of ten missionaries in the foremost part of the ship going to Central India and connected with the Society of Friends, but I fear from certain outward and visible signs – the blue ribbon especially that thought is more to improve than to cast down the first man and so to make room for new creation in Christ Jesus. As the evening came on we encountered a little swell which prevented many of them and others too from attending the gospel – however a nice company came in among them the clergyman who seems a true man and the Right Hon. Childers M.P. who I think was a minister in Mr Gladstone's government. I read a part of each Luke 10 and Romans 10 – the poor man who went down from Jerusalem to Jericho and fell among thieves a beautiful picture of one who needed someone to do everything for him and who submitted to all the grace and mercy of the Good Samaritan's heart and resources. The other a picture of one who though not indifferent to God and His claims was ignorant of the righteousness His grace had brought about through the person and work of he Lord Jesus Christ were striving to establish one for themselves in which they could never succeed but sooner or later must submit and surrender to the righteousness which is by faith. 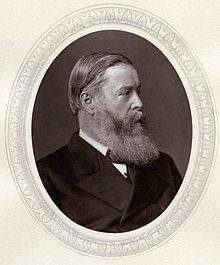 If I may judge from appearances I fancy the word touched some of the religious flesh present but one dear old gentleman an architect residing at Gibraltar enjoyed the word and gave a very hearty greeting after saying "Sir, you have my heart I have greatly enjoyed your addresses". We had a young ritualist too, not yet ordained, with us and he came for a little talk after the meeting saying that what I had said was very good but it was only the beginning and that this work could only be continued by the sacraments and only by the Holy Communion and partaking of the real body and blood of the Lord could this life be sustained. I dare say the Lord will give other opportunities for conversation during the voyage. What a mercy for us in the midst of the terrible confusion man has brought in on every side to have the pure word of God where the Holy Ghost has spoken so plainly that a way faring young man though a fool may not err therein. I was speaking with the Captain about that clergyman who was on board the "Ganges" on my first visit to the East, who said after a gospel meeting – "Let us get up a meeting another Sunday and not let these fellows have it all their own way". You will remember my hearing of him from one of the gentlemen who had built and endowed his church and who refused afterward to attend the service because the preacher was a drunkard – well the poor fellow left Rangoon for Calcutta and while there he was found drunk in the streets and had to be carried to his lodgings where sad to say he committed suicide.

I trust you will have reached home safely without taking cold again – the Lord even Jesus comfort your heart and mind my beloved Angee – during all the many years and changes of our married life, I never felt such love to you and now that we are separated only for a little while then same remembrance of all your love and care during the time we have been together is a real cheer and comfort to my heart while it tastes the savour involved in being absent in body. Our beloved children too – it does cheer me to think of them as going on in the fear of the Lord and a measure the comfort of the Holy Ghost and in this helped by their wives and also to bring up the dear children God has given them in the nurture and admonition of the Lord.

God in mercy ever keep them and us among the humble and contrite and who tremble at His Word. Trust dear Eliza is better and also dear Mr Robertshaw – my love to them and Eunice. My next letter D.V. will be from Brindisi. Now with much to you my beloved wife and each of our dear ones Arundel and Harriett, Harry and Emma and the darling little ones believe me.

Ever your very affectionate Husband